A full day Guided tour, visiting the Kalabaka village (situated at the foot of Meteora mainland Greece) and the monasteries of Meteroa built on natural sandstone rock pillars, dated back to the 12th century. The six remaining monasteries are built on natural sandstone rock pillars and are included on the UNESCO World Heritage List. On the return journey we visit the lakeside town of Ioannina for a coffee break. 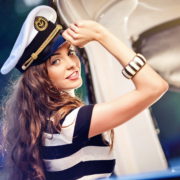 I am a Captain (Ιταλικά)
Scorrere verso l’alto